Affirmative Action Plan – Who Must Comply?

Compliance with Affirmative Action Plans Is Important for the Success of Certain Companies. Is Yours One of Them?

As HR support specialists, we want to keep your business in compliance with state and federal standards to maintain a diverse and well-supported company structure. Learn exactly what affirmative action plans are and how you can avoid noncompliance with current federal laws.

What is an Affirmative Action Plan (AAP)?

Essentially, an affirmative action plan is a document that outlines the company’s implementations of specific measures to meet the AAP law. AAPs are required for companies that work as contractors or subcontractors for local, state, or federal governments. These contracted companies are held to a higher standard than the average organization for equal employment opportunities through the AAP law. A company’s affirmative action plan must comply with federal and state equal opportunity laws as well as training programs, outreach efforts, and other required measures to create a diverse workplace. 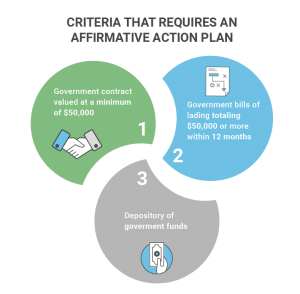 The Criteria That Requires Companies to Have an Affirmative Action Plan

A company with 50 employees or more that meet one or more of the criteria below are required to develop a written AAP.

Companies subject to an AAP must implement Executive Order 11246, which prohibits discrimination on the basis of race, color, religion, sexual orientation, gender identity, or national origin, and Section 503 of the Rehabilitation Act, prohibiting employers from discriminating individuals with disabilities (IWD), into their affirmative action plan. Companies with government contracts or subcontracts valued at $150,000 or more are also subject to implementing the Vietnam Era Veterans’ Readjustment Assistance Act, which protects covered veterans from discrimination, into their affirmative action plans.

How to Stay in Compliance with Your Affirmative Action Plan

Detail how your company’s AAP is implemented within your policies, structures, and programs and how you comply with the nondiscrimination laws and regulations mentioned above in case you are audited. For example, you must detail your implementation of the AAP in your hiring process or disciplinary actions.

The agency can audit your company at any time and is entitled to review a company’s AAP for choosing a contractor to hire or to investigate a complaint regarding the company’s affirmative action efforts.

Building and managing an AAP is more complex and time-consuming than most companies expect. Continuously documenting your affirmative action efforts and successes are increasingly more complex the more locations a company has as there must be one comprehensive AAP for an entire company.

As an HR support company, we work with businesses across the country to help them stay in compliance, avoid penalties with inaccurate or incomplete AAPs, or prevent them from failing to respond to an OFCCP audit within a timely manner. Noncompliance of an AAP is a violation of a government contract, which can result in penalties such as suspension or cancelation of government contracts or monetary liability.

For a stress-free way to ensure your company’s affirmative action plan is and remains in compliance to federal law, reach out to Employer Support Services today.